Game Description:
A classic game played in the deep blue sea!
Objective:
Avoid being turned into seaweed by the octopus!
Game Rules:
Mark out a playing space with a tagging zone in the middle. Choose two children to be the octopi, and the rest of the children will be sea creatures. The octopi stand in the middle of the tagging zone, and the sea creatures all go to one edge of the playing space. The sea creatures sing a chant "OLLIE OLLIE OCTOPUS IN THE DEEP BLUE SEA, OLLIE OLLIE OCTOPUS YOU CANT CATCH ME!" and run across the playing space (passing through the tagging zone) while trying to avoid being tagged by an octopus. If a sea creature gets tagged by an octopus, they become seaweed and must sit in one place with their arms in the air like seaweed. Sea creatures who run out of bounds also become seaweed. Seaweed are allowed to tag people with their hands, but they are not allowed to move their feet. The game is over when all sea creatures are turned into seaweed, or a few champion sea creatures are left. Choose new octopi and start a new round!
Saftey Considerations:
Ensure the playing space is clear of debris and that all shoelaces are tired. Remind children of 'heads up' running.
Adaptations (optional):
Allow seaweed to stand. Choose more (or less) octopi.
Progression (optional):
Different locomotion (skipping, galloping).
Photos: 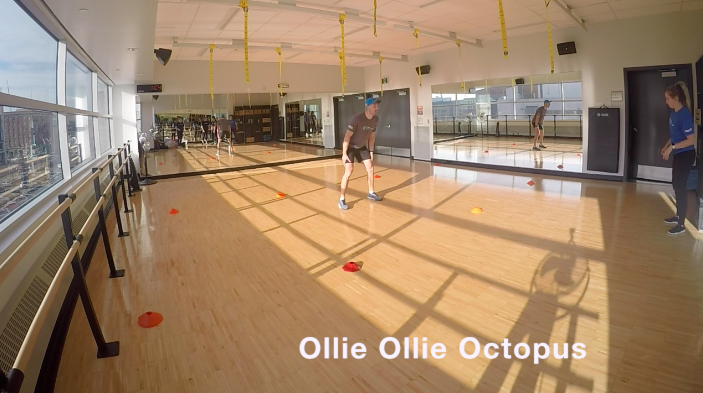